-Nothing More has gained attention from critics and audiences alike for your riveting live performance which sees you appear on stage in body paint while vigorously moving throughout the set and engaging with the crowd. You’ve previously mentioned some of the inspiration for your performance was based on Native American culture. Can you expand further and/or share other factors of your personal life/hobbies have helped you develop your show?
“I have a background in drumming, and I was the original drummer of the band for many years, so that has had a huge influence on not only how I think about the show but even how I move my body. I'm always connected to the rhythm, the beat; naturally my extremities move subconsciously to the drummer in my head. I also did drumline in high school and we performed all over the nation doing really elaborate performance pieces which influenced my desire to always want to do these drum ensemble kind of moments with the entire band. Lastly, I was always interested in martial arts. I wrestled in high school and I do jujitsu and some boxing now. I was always fascinated by the overlap of the warrior spirit or the martial artists and art. There was an overlap at times between those two things and how you would move your body through space and time--and even the body paint that I wear is inspired by primitive cultures that would put on the war paint with intention of getting into a spirit of war or a spirit of battle. In the same way, I like to conjure those energies within myself before the show as I put on my paint and get in the right mindset”.

-We’d be remiss to leave out the other stunning element of your live performance, The Scorpion Tail and the Drum Machine. While both are visually engaging elements, can you explain how both were designed and how specifically they impact the band’s sound?
“The Scorpion Tail was designed originally from an idea that I had in the jam room with a wireless MIDI controller that almost looked like a video game controller. I wired Dan and Mark's guitars through a computer, and I was affecting what they were playing in real time. Just like a DJ effects a prerecorded track, I was playing the effects on their instruments. Daniel, our bass player, decided to weld this monster that I could kind of wrestle with my whole body rather than just pressing buttons with my fingers. We thought it would be more visually compelling and more exciting to perform than something small that you manipulate with your fingers”.

SPIRITS was written during a time of global isolation which caused many to feel weary and anxious for a questionable future and therefore led to a lot of self-reflection. How did you incorporate those themes into the writing process?
“I think a lot of the themes of what's happening in the world around us just naturally make their way into our writing. It's not really something that we have to think too hard about--it just naturally flows into our lyric writing and our intention and energy into the song. It's not as planned out and conscious as you might think. When we're writing the lyrics, we definitely reflect on them and tweak them based on what's going on around us and how we want to portray ourselves in the public sphere, but it all just happens naturally”.

-“Spirit” has multiple meanings--one is “qualities regarded as forming the definitive or typical elements in the character of a person, nation, or group.” The SPIRITS TEST you designed bases its result on how individuals perceive and react to these elements to determine their “SPIRIT TYPE.” What is your SPIRIT TYPE and what are some of its characteristics? How do you think those results feed into your musicianship or vice versa?
“My spirit type is the Tru type. I think the characteristics of the Tru type are more visionary and that lines up with my role in the band quite perfectly. I think when we take the SPIRITS TEST for each member in the band, it has really made a lot of sense as to why we interact the way we do with each other--everyone's role, and everyone strengths and weaknesses. I think that it influences my writing very naturally. When writing lyrics, I gravitate towards the particular sounds or chords or the way my voice just emanates naturally. Mark and Dan are the Fuse types which are more on the heart side of the chart whereas I'm a little more on the head side. Our drummer Ben is a Constant and so that makes sense because we're a little more analytical and destructive in our process. Mark and Dan are a little more heartfelt and creative in the sense that they’re the positive force and Ben and I are a little more the negative force and together they are making a Yin and Yang to our writing process”.

-Nothing More’s mission statement is to “reflect, provoke and inspire.” Can you share how SPIRITS reflects, provokes and inspires?
“I think our lyrics are written in a way that we try to say what people have thought and felt that they didn't quite know how to say themselves a lot of times. That's the goal in our songwriting and I think with the album ‘SPIRITS,’ it is tapping into a deeper side. It's a little more esoteric and a little less obvious in regard to the lyrics and the meanings and the messages behind some of the songs. It's touching on a more subconscious level in people whereas on the songs from our self-titled album, the lyrics were a little more straightforward and you understood them consciously. This one touches on some deeper archetypal and older themes in the human spirit”.

-If you had the ability to universally change one thing that would positively impact humanity, what would it be and why?
“I’m going to quote Alan Watts on this one; I think he actually was quoting someone else, but I heard it from him. He said that if everyone could have an organ in their body that was a constant reminder of death that they would live their lives in a way that looked very differently than the way that we tend to live our lives. I thought that was an interesting thought and I think that that might affect humanity for both better and worse. I don't think it would be just for the better. It would be interesting to see what that would cause people to do and how it might change their behaviors”.

-What are three surprising facts people might not know about you?
“‘The Office’ is my favorite TV show of all time. Stepbrothers is my favorite comedy movie of all time, and I love horror films and scary movie nights”.

-Are there any particular books or films that have helped shape your sensibility as an artist?
“A book by Alan Watts called ‘The Book’ and then another one of his books called ‘Become Who You Are’--that’s a great one”.

-If you were to record a duet with a current artist outside the genre of music for which you’re known, who might that be and which song would you cover and why?
“I'm going to say Carrie Underwood because she's been a fan of the band and has even come out to one of our shows. I think it would be really interesting to do a duet with a country artist or someone just outside of the box that we’re typically in. If it were a cover song, ‘The World I Know’ by Collective Soul would be a great cover song on acoustic”. 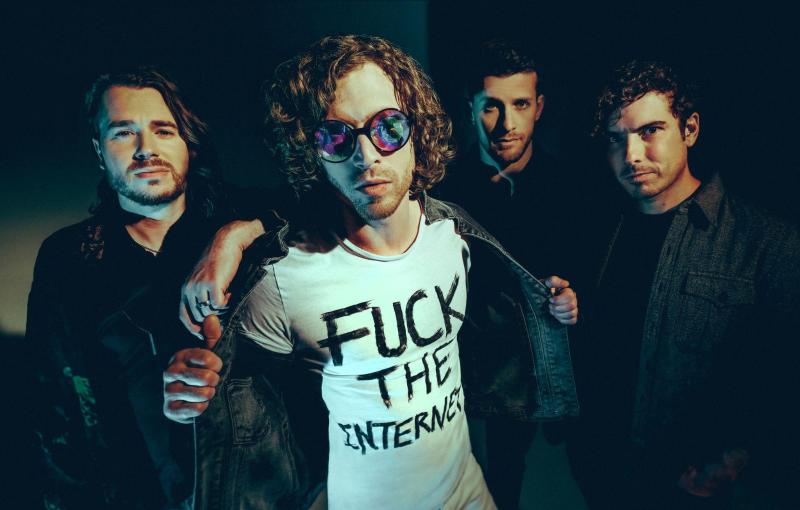 Nothing More
From USA
https://nothingmore.net/